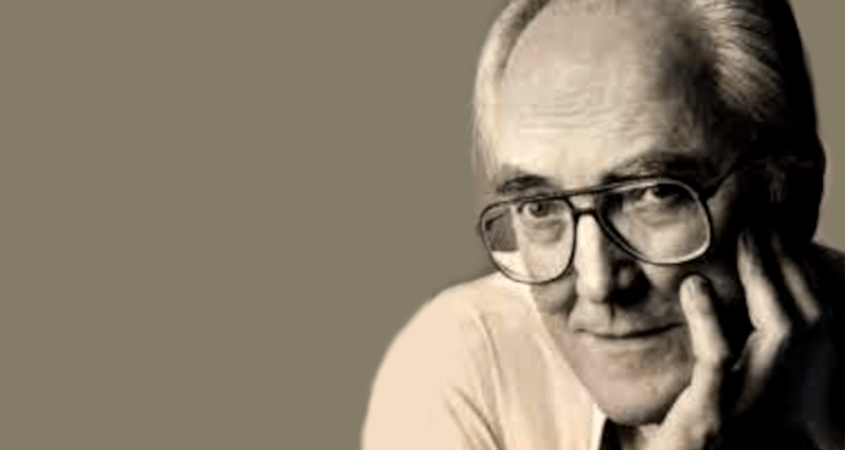 Denis Donoghue, first Director of the Yeats International Summer School and Henry James Chair of English at New York University, died in North Carolina on 6 April. He was 92.
Professor Donoghue can lay claim to being the foremost Irish literary critic of the sixty or so years of his professional career, publishing over thirty books and innumerable articles, while delivering many memorable keynote lectures and talks. His last appearance in Sligo was in 2015 at the Yeats Summer School which celebrated the 150th anniversary of Yeats’s birth.

Donoghue was born in County Carlow and brought up in County Down, at Warrenpoint, the town which provided the title of his 1990 memoir of his early years. Like his contemporary John McGahern, his father was a policeman, in Donoghue’s case a member of the Royal Ulster Constabulary. His Irish Republican Brotherhood uncle was told to stand down in Easter week but was interned by the British anyway.
In terms of Irish culture, this North-South bilocation as a member of a Catholic nationalist family whose father worked in a largely Protestant police force in post-partition Ireland, went some way to define Donoghue’s political as well as literary lineage. In the 2015 lecture he told us, ‘I date my origin from the Post Office’, while recapping his explicit opposition to historians who say that Home Rule would have happened after the Great War. He also expressed his not so explicit scepticism of the value of the Good Friday agreement 80 years after Easter week.

Donoghue’s career took him to UCD before joining NYU in 1980. UCD made him as one of the last true expert generalists, a professor of literature who taught a wide curriculum and could lecture and publish outside the narrow specialisms in which the modern academic is forced to work. It was clear that his thinking for undergraduate lectures and student classes would emerge in broadly-conceived but also textually-detailed critical books: on American poetics (Connoisseurs of Chaos), Victorian and Modern poetry (The Ordinary Universe), compendious essay collections on Irish and American literature (We Irish and Reading America), aesthetics (Speaking of Beauty and Metaphor) and studies and biographies of individual writers, including Jonathan Swift, Walter Pater, Emily Dickinson, Henry James and, of course, William Butler Yeats.

Donoghue’s writing on Yeats is both an essential first round for the new student and a crucialargumentative sparring partner for the expert. The criticism has lasted: his 1971 Fontana Modern Masters book, Yeats – really a long essay in a little paperback which can still be found in second-hand bookshops – remains as a perfect introduction to the poet and still the best place to explore a stringent and complex account of Yeats’s politics and symbolism.
The view of Yeats that Donoghue developed throughout his long career ultimately argues that Yeats was neither an idealist nor a symbolist, and that if Yeats’s poetry really carried through some of its author’s more extraordinary philosophical positions he would be considered a minor mystic rather than a major poet. For all that he challenged the hieratic in Yeats – the poet’s sense of the holy calling of artist – Donoghue’s own writing could tend to the hieratic at times, happiest breathing the rare air of an elevated sense of his vocation as scholar.
That is a small price to pay for a critic who dealt with canonical literature in all its seriousness, a teacher who demanded big thinking for the highest stakes. It is a rare position in contemporary literary criticism or history, and one we may not see again. His friends in Sligo will miss his commanding frame and the extraordinary command of his intellect.